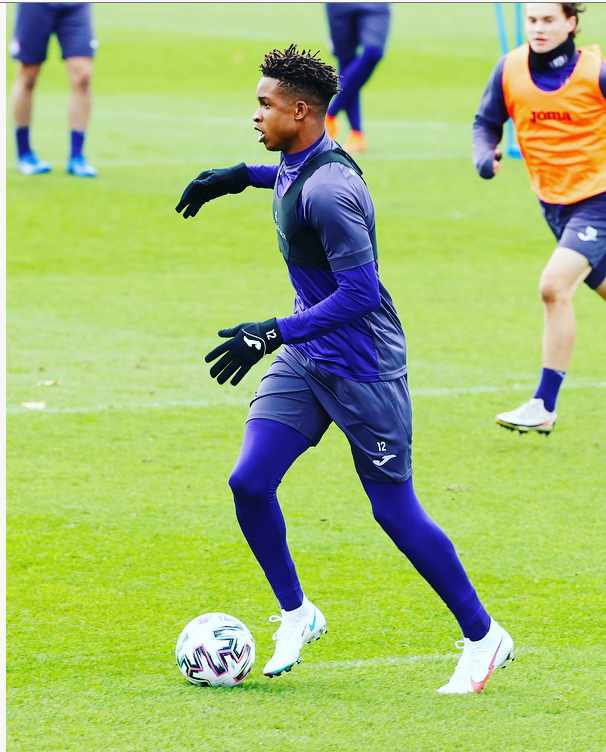 Sunday evenings are for local football friendly matches in the community. Smaller teams borrow players from the 5-aside team which is popularly called “La Liga” or “Monkey Post.”

I stopped playing football and whenever i want to exercise and get sweaty, i get myself involve with the 5-aside team. The “La Liga” has like over 8 football team sets waiting for its turn to play. They have a duration of 20 minutes of both teams to play and when the time elapses without anyone scoring the small post made with stones, the both teams will leave the pitch and the next two will have to grace the field. This is how it has been going for us – the ones that just want to play football for fun and exercise and not for passion. The big pitch guys are the real deal and female fans from our community always turns up for them when a match is going on. The notion that implies “a woman makes a man works harder” was no debate at all because everyone gets serious at any sight of a female specie in the stands.

Paul Mukairu tapped me at the back and i saw a young boy with big dreams, his football boot looks tired and worn out. He brought out a sugarcane stick from his bag and started with “senior man, you go chop sugarcane?” I raised my eyebrow at him with disdain and the sun wasn’t funny, i came to the football pitch early enough to see friendly matches between local teams in our community. Nevertheless, he wasn’t talking to me about the sugarcane but someone else. He wore his boot with a relaxed Barcelona’s jersey, the wind was lacking and it seems the relaxed evening breeze went for holidays. I was not in my right frame of mind and i wasn’t able to decipher what the sun was doing to my brain.

I thought it wrong initially with the mindset i came to see a friendly game. It was a competition and Paul Mukairu’s team was getting ready to pounce on any sloppy defence. People started gathering and the football players were complete in the pitch. The only problem which delayed the game was the referee’s “whistle.” The whistle were never loud even if you air bend all the wind in the whistle’s mouth like Avatar Aang. I saw Paul Mukairu without his usual red hose but i didn’t think anything was wrong due to the fact he was the reason i came to see the football game. I was/still a big fan and i admire his commitment and enthusiasm. He was very young but his tiny legs can take a corner from a far position. Like i said, this is the reason i came to see this game.

“Where are the footballers?” the referee said with so much authority. The referee didn’t look professional, he’s eyes was bulging out with sweats all over his blue kaftan dress which is due to the scorching afternoon sun. His slippers has chopped badly underneath and the dust particles added misery to the already suffering foot wears. I know the referee personally and he is never friendly with people he knows at home in the football pitch. Everyone looks very serious with the football game and with that seriousness in mind, we expected a tough game at the local football pitch. There was no linesmen at all and the referee will be responsible for both the offside and throw-in decision.

Paul Mukairu’s team had no zeal in the game. Paul was barely 8 years old and didn’t look happy as his side was slow and unable to adapt to the game on time. A diving header from a Gbagyi boy called “Abacha” was enough to keep Paul’s team confused and restless. The first half was not enjoyable and i can’t just go straight and expect a miracle from Paul Mukairu when we all know Paul’s team is far from being useful. Another goal came from Lawal who made a poor clearance from a set-piece and Abacha made it 2 nil with a fine curler outside the 18 yard box. The crowd was overwhelmed and screamed harshly with that powerful goal from Abacha. Abacha has stole the spotlight and it seems the Paul Mukairu i came to see was no where to be found in the game.

He dribbled one, he dribbled two, a closed marking spoilt the show and Paul Mukairu was looking dangerous for his team. A long pass from his best friend Christopher Eze was enough for him to make an unexpected running to lob the goalkeeper. 2-1 was the score and the day was getting dark, we hardly see the ball clearly and the thought of ending the game already were running through the referee’s mind. The game actually ended and Paul couldn’t contain his tears, his passion was so real and his best friend was seen holding and consoling him. What a game that saw his pair of boot looking dirty, his jersey was rough handled and we can notice the roughness from distance. A young boy playing with so much motivation was all i saw and the love i have for him grew so much without boundaries.

In case you missed previous episodes, kindly read below: