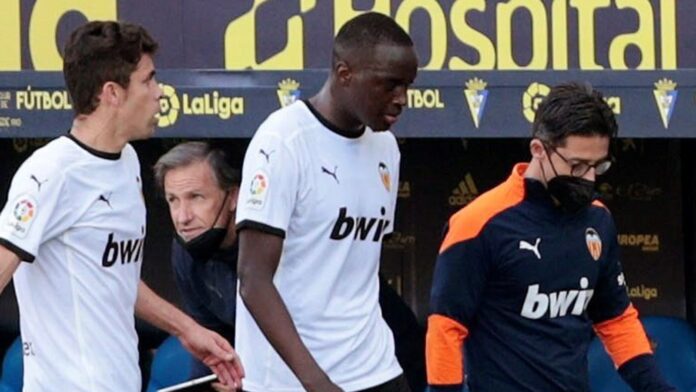 This is very sad as Valencia player Mouctar Diakhaby suffers a racial abuse in a La Liga game against relegation-battled side Cadiz on Sunday night. His teammate showed support by walking off the football pitch with him.

The situation happened before the half-time whistle was blown. Valencia’s defender Mouctar Diakhaby crashed with Juan Cala as Cadiz played a free-kick into the Valencia’s 18-yard area.

The 24-year-old center back showed his angry side and after an oral altercation where he was dragged back by his fellow colleagues Kevin Gameiro and Cadiz’s player Fali, he saw a yellow card for not conducting himself properly.

After having a discussion with the on-field official, he explained further about the purpose for his uncontrollable manner. In support of the player, his teammates walked off the football pitch straight to the tunnel with him as the match was stuck at a 1-1 tie.

After several minutes in the tunnel, Valencia players held a short meeting as to what will be the best solution in handling issues like this. The conclusion saw them come back to the football pitch to resume the match after 20 minutes gone.

Cadiz goalscorer Cala was still in the game as they resumed until he was replaced at half-time. The French defender Mouctar Diakhaby was also substituted and was supplanted by Hugo Guillamon.

A tweet from Valencia’s official twitter page insisted they are in full support of their player. Valencia’s captain Jose Gaya was interviewed after the match and he spoke about the incident saying an insult from the opposition was unacceptable in any form.

As the kick-off whistle was blown, Cadiz Cala registered the opener for the host after which Gameiro’s 19th-minute goal levelled the score for the visitors before the game was halted due to the abuse.

Well, Cadiz later won the game (2-1) as Marcos Mauro header was enough to gift them all three points, extending the margin away from the relegation spot.