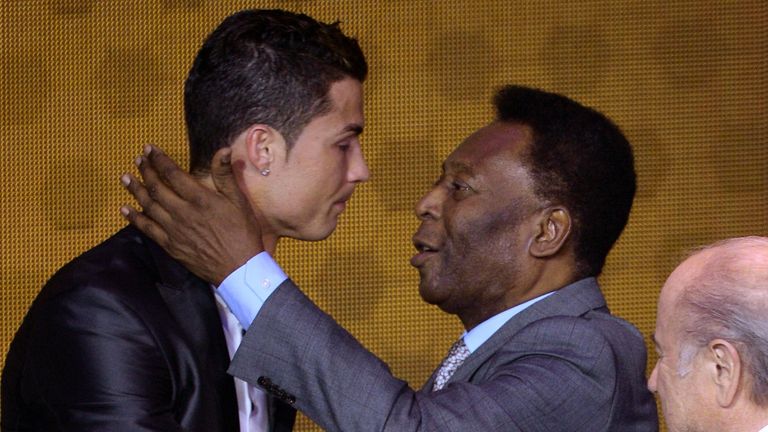 Cristiano Ronaldo didn’t waste time as he responded to his critics with a perfect hat-trick as Juventus overpowered Cagliari by 3 goals to 1 in the Serie A this weekend. His first half hat-trick against Cagliari took his total goals to 770 in his football career.

Cristiano Ronaldo used his social media pages/handles to heap praise on legendary and iconic football model Pele who is described as one who impacted him when he was growing up in the little village in Portugal Madeira; Pele responded as he hails Ronaldo on his goalscoring ability he has shown in the span of his career till date.

Football icon and Brazil legend took to his social media page to hail Cristiano Ronaldo’s goalscoring instincts after the five-time Ballon D’or netted hat-trick in Juventus’ latest victory over Cagliari (3-1 was the score).

Like i said, Cristiano Ronaldo’s hat-trick was a “perfect one” and it is considered as one of the fastest hat-trick in modern Serie A with 32 minutes just enough to reach that height. Ronaldo three goals comes with a header, a right-footed strike from the penalty spot, and a left-footed strike as Juventus comes back to winning ways after a huge disappointment in the UEFA Champions League this season.

The hat-trick took Ronaldo’s tally to 770 where the 36-year-old took to his instagram and facebook to acknowledge the numbers he has peaked and also hailing Pele’s legendary status.

Furthermore, the 80-year-old former footballer Pele who helped Brazil dominated the World Cup in three appearances (1958, 1962 and 1970) also used his own social media handle to praise Ronaldo on his goalscoring numbers he has attained.