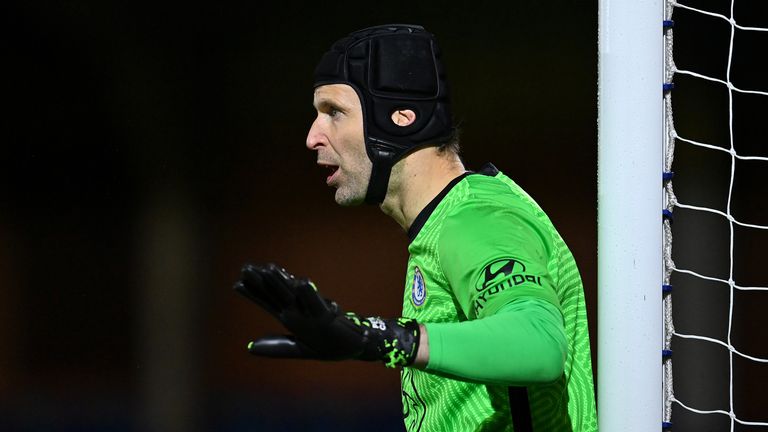 Chelsea legendary goalie Petr Cech has made a historic appearance for Chelsea’s Under 23 squad against Tottenham Hotspur.

Iconic goalie Petr Cech, endured an initial error with a bizarre first touch where Tottenham capitalized on it to get an opening goal in the game. Danny Drinkwater also made an appearance in the game and was shown a red card for hitting out at Alfie Devine, 16, who was also sent off too in the occasion.

Petr Cech has made a massive comeback from football, but the former Leicester City player Drinkwater was shown the red card as Chelsea Under 23 bounces back from 2-0 slip to overpower Tottenham’s young stars by 3-2.

This game is Petr Cech’s debut match since officially hanging his boots as an Arsenal’s goalkeeper before he came back to Chelsea Football Club as their technical and performance director in June 2019.

The Czech Republic international has also been training with the first team this campaign and was listed in Chelsea’s final 25-man EPL team in the beginning of the season (September, 2020) as an urgent Chelsea’s goalie whenever there is injury or unavailability of goalkeepers.

Well, Cech had an opening disgraceful evening where his bizarre first touch which led to Tottenham first corner helped them to bring on an opening goal.

Chelsea’s young boys didn’t relax as their work rate paid off. They levelled 2-2 in the second half with a bright two goals in 3 mins – conversion from the penalty spot by Myles Peart-Harris and Marcel Lewis’ unexpected subliminal shot.

Meanwhile, the two teams then had a player each shown a redcard when 16-year-old Alfie Devine had a brawl with former Leicester City man Donny Drinkwater – there was a heated argument as the 2015 Premier League winner responded by hitting the Spurs 16-year-old player with his leg.

Where the both team were left with 10 players, Chelsea looked on to victory as Peart-Harris found the back of the net in the 88th mins to accomplish the massive 2-0 comeback to 3-2.

Petr Cech added a role in Chelsea as a non-contract footballer in a measure due to unavailability of players which might be caused by the coronavirus global outbreak.

In his time as Chelsea’s number one before moving to Arsenal, Petr Cech registered 13 important titles, which also included 4 Premier League trophies and the UEFA Champions League during his 11-year spell.