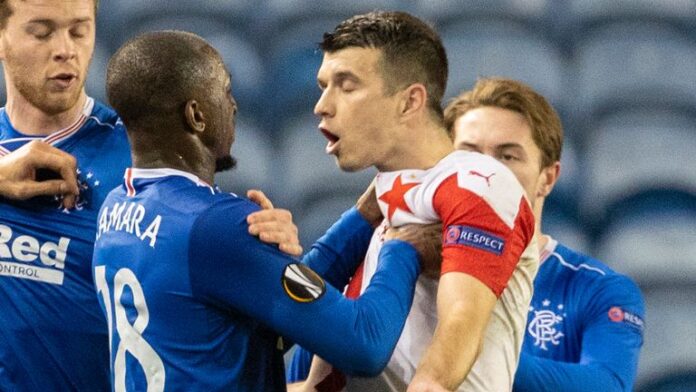 Ondrej Kudela who plays as a defender for Slavia Prague has been handed a 10-game ban by the UEFA board for “racist attitude” which was targeted to Rangers playmaker Glen Kamara, who will also see a three-match suspension.

As full investigation was still on-going by the UEFA disciplinary committee, Ondrej Kudela was placed on temporary suspension which saw him miss the opening leg at the Emirates Stadium against Arsenal which ended in a 1-1 draw.

Ondrej Kudela will now be unqualified for selection in the match day squad for both his country and club participating in any UEFA licensed competition. He will be unavailable for their future nine matches graced by either his club side Slavia Prague in Europe or Czech Republic his motherland. A quick reminder that European Championship starts immediately this current season comes to an end which makes Kudela forbidden to make the 23-man list for his country.

Rangers midfield player who subjected to Racist slur Glen Kamara also saw suspension for three UEFA club competition matches. Reasons be that he followed Ondrej Kudela all the way to the tunnel after the game and physically assaulted the defender repeatedly at the Ibrox stadium.

Rangers midfielder Glen Kamara was all filled with anger after Ondrej Kudela slided into his ear and whispered unaccepted saying while obstructing his mouth view with his hand, triggering the brouhaha in the final period of the game.

Kudela denied using a racist saying via Slavia statement; he accepted that he swore at Ondrej Kudela after he was brought down during the course of game but never abused anyone racially. As it stands now, both footballers can appeal their ban imposed on them by UEFA.

Another Rangers player Kemar Roofe was also handed a 4-game ban after he was found guilty for assaulting another Slavia Prague player. This same Kemar Roofe was sent off during the game after striking Ondrej Kolar’s face (Slavia Prague’s goalie) with his boot; the situation eventually saw him racially called-out on social media.

Conclusively, Rangers were also amerced with a fee of €9,000 (£7,800) for inappropriate behavior.