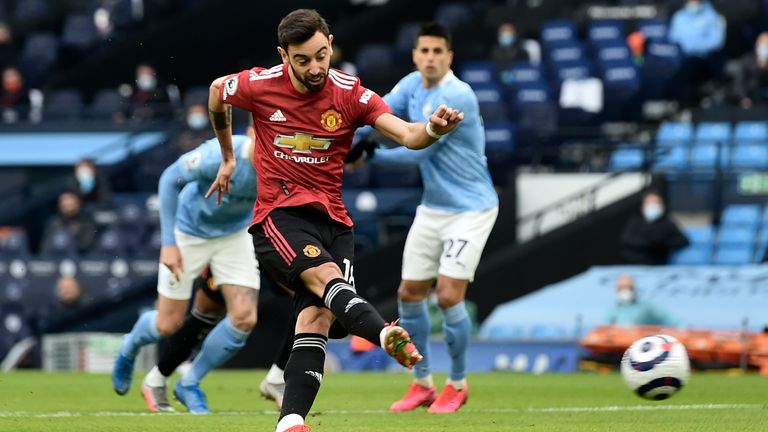 Once again, Manchester is RED as Manchester United halted Manchester City’s 28-match undefeated streak in all competition with a massive 2-0 win. At the Etihad ground, a premature goal in the first and second half from Bruno Fernandes and Luke Shaw respectively, pounced on the league leaders.

Ole Gunnar Solskjaer’s side has been dragged recently by opposition fans and pundits for not recording a victory against the “big six” this EPL campaign but were one up after just two minutes into the first half. Bruno Fernandes didn’t fail to convert from the penalty spot after Gabriel Jesus carelessly brought Anthony Martial down just 34 seconds after the kick off whistle was blown.

Manchester City came victorious in their previous 21 games on the run in the league and since then, called the “world favourites” in English elite league. They were in charge of the ball possession and substantially hit the woodwork through Rodri’s strike at the beginning of the second half. As time goes a little, Luke Shaw moved brilliantly and ended the move with a stunning strike to put The Red Devils on a winning-chills on the big day.

Well, Manchester United with this victory are not even looking to win the title ahead of Manchester City’s as the margin were reduced to 11 points with 10 games to grace. Although, the chase for top-four race is very open and the derby win comes as a big boost for the red Manchester team. Chelsea, Tottenham, Arsenal, West Ham are all vying for the position in order to participate in next Champions league campaign.

Luke Shaw makes it 2-0 from a wonderful drive

Manchester City hasn’t been behind for a single minutes of their last 19 top-flight matches until Bruno came along. They were outclassed by Bruno’s early penalty hero display. Luke Shaw who won the Manchester United’s player of the month for February, 2021 almost doubled their lead just moment after the penalty was scored. Luke Shaw has been on good form since Telles was signed from FC Porto, and now he is considered as one of the best left back in English football and arguably, in the world at the moment.

In their next fixture, Manchester City will welcome Southampton in the English Premier League at the Etihad Stadium on Wednesday while AC Milan will pay a visit to the Old Trafford outfit in their UEFA Europa League last-16 first leg tie on Thursday before they will be hosting West Ham on Sunday.