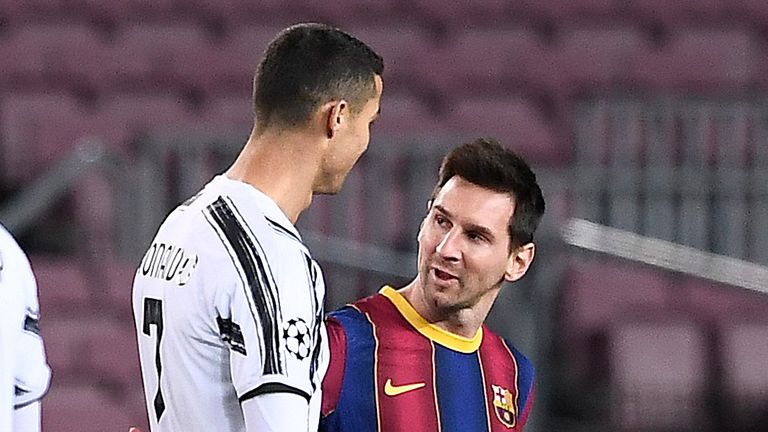 Manchester United has been eliminated from the group stage in the UEFA Champions League 2020/2021 season after a shambolic display at the RB Arena on a Tuesday night. Also, Cristiano Ronaldo claims his G.O.A.T status at Camp Nou after scoring twice from the penalty spot. Full report below:

Cristiano Ronaldo had a penalty-brace as Juventus overpowered the host, Barcelona 3-0 at the historic Camp Nou stadium to clinch the winner spot in the UEFA Champions League famous Group G. Barcelona has not lost a match in the UEFA Champions League recently at Camp Nou and that ‘no-defeat-streak’ has been brought to an end after Juventus went hard on the Spanish side.

It was Cristiano’s first game with his former El-Classico rivals, Barcelona, and Lionel Messi since securing a transfer to Juventus from Real Madrid back in 2018. Both GOAT’s (Greatest Of All Time); as called by their fans, briefly hugged before the match started on Tuesday night. It was Cristiano who sharply made the mark by winning and scoring an early penalty to keep the host wondering if they are on the right track.

The former Manchester United man tested Barcelona’s goalie Marc-Andre ter Stegen earlier, before registering his 13th goal in Camp Nou from the penalty spot exactly in the 13th minute after he was fouled by Barcelona’s defender Ronald Araujo.

The game became intensified and Juventus was the counter attacking side whereas Barcelona attacked but weren’t clinical in front of goal. Juventus defender Danilo, threw a ball just wide in the opponent’s yard as Juventus held up Barcelona’s attacking pressure with a brilliant volley from United States Mens National Team (USMNT) striker, Weston McKennie. This gave the Old Ladies a two-goal margin and full control of the popular event. It was obvious that Juventus came for business and didn’t waste time to get the job done.

Juventus won their second penalty when Clement Lenglet was punished for a handball just 7 minutes into the second half. Cristiano Ronaldo once again showed his relevance in the team as he converted the second penalty from the spot.

Ronaldo celebrated with his famous leap after the second goal while Lionel Messi was left in agony as all his shots on target proves abortive. Gianluigi Buffon was in a fine form on Tuesday night.

Things became more woeful for Barcelona 15 minutes to the final whistle when Leonardo Bonucci thought he had registered a goal, only for the Video Assistant Referee (VAR) to overrule it. VAR displayed he was in the offside position as he carried the ball into the net after Ronaldo’s strike. Both teams had already secured a spot for the Round 16 stage before the game started and although they finished the group stage on 15 points each, the Italian giants took pole position by the rule of a superior head-to-head stance. Struggling Barcelona’s head coach Ronald Koeman, was left utterly devastated by the way his side played throughout the whole game. He explained that there was no right attitude in the final third, that they easily gave the ball away, and that the defense was in shambles.

German machine, Borussia Dortmund who were one goal down earlier, scored twice in the duration of 11 minutes to clinch a 2-1 away win at Zenit St. Petersburg in the UEFA Champions League on Tuesday night and also the leader in Group F.

Zenit St. Petersburg initially registered a goal exactly when Sebastian Driussi’s interrupted strike went rolling up into the back of the net after a wrong-footing by goalie Marwin Hitz.

Marco Reus hits the crossbar for Borussia Dortmund at half-time but Lukasz Piszczek got a stunning equalizer in the 68th minutes, then, Axel Witsel’s brilliant left-footed super shot from the location of the 18 yard box put Lucien Favre’s side ahead in the game, gifting them a hard earned three points.

Zenit St. Petersburg did all they could as the game was coming to an end and nearly got away with a late leveller but Borussia Dortmund held on to clinch the important win on Tuesday night.

The match also saw a moment of history for a young teenager after Borussia Dortmund’s 16-year-old forward Youssoufa Moukoko came on to replace Felix Passlack and becoming the youngest-ever footballer to star in a UEFA Champions League game.

Lazio also secured a spot in knockout stages of the Champions League for the first time in over 20 years even though they played a 2-2 draw as they welcomed Belgium side Club Brugge, who were one man down in almost all the second half of the game.

Lazio who needed at least a stalemate to get to the next stage, showed absolute dominance in the game as they started well with a 2-1 score ahead of the visitor before the half-time whistle was blown. Joaquin Correa and a Ciro Immobile penalty was enough to give Lazio all three points while Club Brugge Eduard Sobol was shown a red card in the 39th minute.

However, Lazio also struggled in the second-half and their morale significantly dropped when Hans Vanaken gave a fine nodding to equalize in the 76th minute of the game.

In an outstanding conclusion, Charles De Ketelaere threw a powerful shot which hits the Lazio bar in injury time as the light blue side fought to the end to turn up as runner-up in Group F and also on 10 points, Club Brugge also finished third in the group with a massive 8 points.

Manchester United suffered a UEFA Champions League group stage elimination despite a late imposed pressure to make it 3-3 as they saw a 3-2 loss at RB Arena on Tuesday night.

The 2009-founded club were in full control in the early minutes of first half and drove into a 2-goal margin where Manchester City loaned player, Angelino and fine forward, Amadou Haidara registered a wonderful strike. Just after the second half, Justin Kluivert made it 3-0 on the scoresheet after a shambolic defending display from Harry Maguire cost the English side.

Bruno Fernandes’ conversion from the penalty spot brought the Red Devils back to life in the 80th minute and Paul Pogba’s controversial header (Pogba nodding to Maguire’s arm before it entered the net) heaped a large pressure for the hosts who went on to keep possession and run down the clock. Everything fell apart for Manchester United who were trying to get a draw from a slow start and will now see theirselves in the last 32 of the UEFA Europa League.

The UEFA Champions League game between Paris Saint-Germain and Istanbul Basaksehir was interrupted after both clubs agreed to go off the football pitch due to an alleged racist remark and display by the UEFA fourth official to Basaksehir’s assistant manager.

The game was stopped at first because a dispute ensued in the 14th minute. The dispute saw Basaksehir’s assistant coach Pierre Webo shown a red card and immediately sent off.

UEFA with an unanimous decision revealed that the match will be replayed with a different fourth official and the replay will start at exactly 14 minutes – where the game was initially halted.

Manchester United’s 3-2 result in Germany actually means Paris Saint Germain has made it to the knockout stage whether they lose, draw or win.

A very different Frank Lampard’s side were looking for a win in front of their own supporters and that left them frustrated as Krasnodar stole a 1-1 draw at Stamford Bridge. Chelsea’s youngstars, Anjorin and Gilmour also impressed Frank Lampard who applauded them at a post-match interview.

The London club already won the first position in the Group E but former Newcastle star Remy Cabella opened the scoring for the visitor and gave the Russian side the boost after 24 minutes into the match.

Chelsea reacted as soon as possible when Jorginho scored a penalty after Tammy Abraham was brought down. Chelsea were not able to secure a victory over Krasnodar as the visitor were compact at the back as they defended impressively.

At the Stade Rennes versus Sevilla’s encounter, Jules Kounde’s brilliant volley from the side of the 18-yard box and Youssef En Nesyri’s brace for Sevilla clinched a 3-1 victory for the second placed Sevilla. Rennes got a consolation goal when Georginio Rutter’s converted late from the penalty spot.