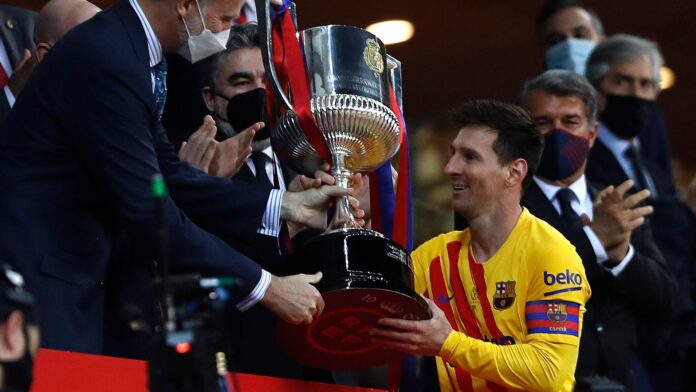 Renowned football magician Lionel Messi registered a brace as Barcelona inflicts more misery on Athletic Bilbao who lost their second Copa del Rey final in the same month. Barcelona was a dominant force that cruised past Bilbao 4-0 in Seville.

Just before the final against Barcelona, Athletic Bilbao was defeated 1-0 by Real Sociedad in a rescheduled 2020 Copa del Rey final that was postponed to April 3, 2021 due to the adverse effect of Coronavirus last season. Real Sociedad defeating Bilbao means they have finally touched a major title for the first time since 1987.

During the first final against Real Sociedad, Real Sociedad’s skipper Mikel Oyarzabal converted from the penalty spot by sending Unai Simon the wrong just 18 mins into the second half after Portu was brought down by Bilbao’s back man Inigo Martinez.

With the extension of that pain experienced in the last final, Athletic Bilbao becomes the first team in history to lose two Copa del Rey finals in a single month.

Antoine Griezmann scored an opener for the Camp Nou side in the second half after he converted a brief cross from midfielder Frenkie de Jong, who later extended their lead just three minutes later.

Lionel Messi who got his beard shaved for the final was subjected to rugged tackles from Athletic players but showed his class with an impressive goal in the 68th minute, where he dribbled past Bilbao’s back men moving down the right flank and merging with Frankie De Jong before shadow-dribbling another player to mark his 30th goal in all competition for Barcelona.

Barcelona bounced back from their 2-1 loss in El Clasico last week, scooping a major of 79% of the ball possession after half time and was close to an opener in the first half when Frankie De Jong hits the woodwork, and Lionel Messi striking the rebound that leads to goal kick for Bilbao.

Quick reminder, Athletic Bilbao defeated Barcelona 2-1 after extra time in Spanish Super Cup final played in January but was outclassed on Saturday night by Barcelona where they recorded only one shot on goal (off target) before the first half break.

Athletic Bilbao goalie Simon made three massive saves on a roll in the first half, making use of his leg to keep Griezmann’s strike out of the boundary and also making a crucial save from Sergio Busquets attempts on goal. Trying to keep out Pedri’s name off the goalscorer’s list, Griezmann got passed Simon seal the opener and from there, it was a goal galore from the Catalans.