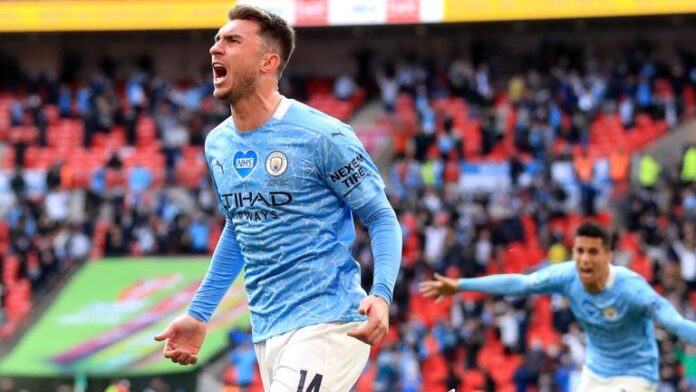 Manchester City has been crowned champions of the 2021 Carabao Cup after defeating Tottenham Hotspur on Sunday evening.

Manchester City clinch the League Cup for the fourth time consecutively after Aymeric Laporte swerved the Citizens to a 1-0 cruise over Tottenham with viewers in Wembley teaching 8,000 football fans.

The Manchester City back man lifted in the 82nd minute to head the blue side of Manchester to the title, making Manchester City reach a joint title record with Liverpool (each teams holding eighth League Cup title). They are also the second team after Liverpool to win the League Cup for four consecutive times in a row.

With their quadruple title bid tarnished by Chelsea when they were knocked out of the FA Cup semi-final, their hope for a treble still remains untouched after sealing a win at the Carabao Cup finals. On English Premier League win this season, Manchester United will have to lose to Liverpool with City registering a win in their next EPL fixture. Their UEFA Champions League bid is still glaring at the moment with Paris Saint-Germain looking to upset the Citizens during the famous midweek fixture.

Lol..! Tottenham Hotspur is still facing a 13-year football without a title and Son was all down with tears where he was consoled by Gareth Bale. Tottenham Hotspur woeful display continues at Wembley Stadium with the defeat today marks their sixth-straight loss at the Stadium.

Before the half time break, the game was just obvious with Manchester City’s formidable attack forming a heat map unfavourable for the London Club outfit. Missing so much massive chances, Raheem Sterling strike was defendd by Eric Dier while Phil Foden blistering strike deflected off Alderweireld and making way to the goal area. Riyad Mahrez solo curling was seen wide. Manchester City had a total of 29 touches in Tottenham 18-yard box in the first half, while Tottenham Hotspurs recorded just a touch in Manchester City’s box.

Manchester City started chasing as the second half began where Tottenham Hotspur’s goalie Hugo Lloris kept them in the game after 74 minutes in the clock. Hugo Lloris dived swiftly to his right position to save a not-so-serious effort from Mahrez attempt on goal.

Gloriously, the winner was made with just eight minutes to extra time, as Kevin De Bruyne contributed a free-kick to the goal post, where the French defender Aymeric Laporte jumped to nod Manchester City to the title.

Both teams shared 50% fans attendance with a total of 4000 fans representing the opposite. Tottenham Hotspur has concluded as the losing side in five of their last six finals in all major competitions unable to register a goal in each of their previous four finals (three times in League Cup and once in the UEFA Champions League). Manchester City has recorded 19 wins of their previous 25 League Cup games under Pep Guardiola with only Roy Evans having a much winning streak amongst head coaches in League Cup history.