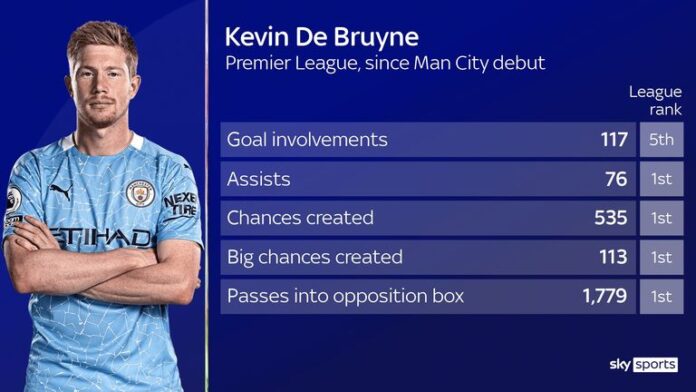 The sensational playmaker, whose current contract was scheduled to expire in 2023 has now signed a 2-year extension for the club. De Bruyne will turn 30 in June, 2021 and he is now on course to see off the remainder of his massive footballing career at the Manchester club.

The Belgian midfielder has had a bright stint since making a permanent transfer from Wolfsburg in 2015. Since his arrival at the Etihad, he has won seven big titles, which could be potential 11 at the conclusion of the campaign if Manchester City can make a scintillating performance that will gift them the quadruple.

Apparently, extending this contract has set his sight on future major honours in Europe which made him alarms football fans that the best is yet to arrive for him and Manchester City’s squad.

Last year, Kevin De Bruyne won the Professional Footballers’ Association’s (PFA) player of the year and right now, the midfielder has registered seven goals with 16 assists; seen as a flashy season for the Blue side of Manchester. Manchester City’s director of football Txiki Begiristain has always pointed Kevin De Bruyne as one of the most exciting players in the world at the moment and very happy that he is with them.

The 29-year-old midfielder has had a key role since they started their quest to clinch the English Premier League trophy this season but what is the way forward as they also have it in mind to seal a record-breaking Quadruple? Will De Bruyne help his club hit that landmark in English football?

The citizens are on a journey to snatch the topflight league title from Liverpool. They are also in the UEFA Champions League quarter-finals going head-to-head with Borussia Dortmund, still in the FA Cup semifinals looking out to outclass Chelsea and still has a Wembley showdown in April that will see them beat Tottenham in the League Cup final.