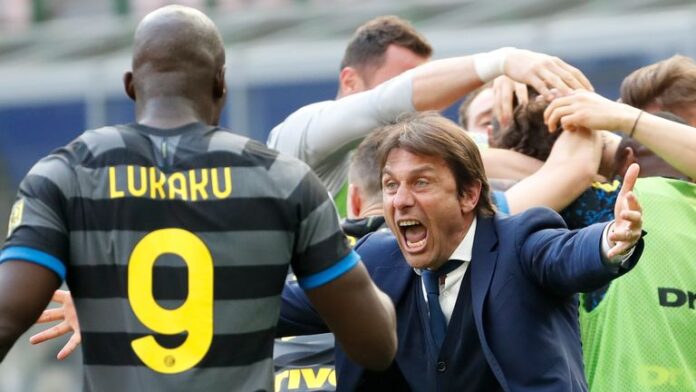 Inter Milan has finally won the 2020/2021 Scudetto for the first time in 11 years, terminating Juventus’ nine-year reign as Serie A winners.

Antonio Conte‘s men crossed with the first leg over the line with a 2-0 victory over Crotone on Saturday, but Atalanta’s failure to win away from Sassuolo on Sunday afternoon made sure the league leaders were crowned champions with a massive 13-point margin with just four games to play.

The important victory came with goals from Christian Eriksen and Achraf Hakimi and that was enough to abruptly bring Juventus’ nine-year reign to an end. The dominance was started by Antonio Conte back in 2012, with coaches like Max Allegri and Maurizio Sarri also winning the league title for Juventus.

Inter Milan have lost just two times this campaign – against AC Milan (2-1 defeat) in October 2020 and against Sampdoria (2-1 defeat) in January, 2021. After losing to Sampdoria in January, Conte’s men had an still-in-progress 18-match undefeated streak which saw them recorded 14 victories with subsequent 11 wins in a row.

Inter Milan also scooped first position from then-leaders AC Milan on February 14 and they have held on it, with a 3-0 victory over their bitter rivals AC Milan making them the Scudetto leaders till they were confirmed as winners after Atalanta failed to record a victory.

Juventus with some summer signings and Cristiano Ronaldo was expected to extend their reign to 10 years in the Serie A but suffered run of games with inconsistencies under their new manager Andrea Pirlo. As it stands now, Juventus’ UEFA Champions League qualification for next season is still in doubts where clubs like Napoli, Atalanta and AC Milan are all struggling to feature in the UCL next campaign.

AC Milan manager Stefano Pioli’s was tipped to clinch the Scudetto and was the Serie A leaders on Christmas day, but they were unable to keep that winning consistency with their scintillating form at the initial stages of the season. They are also in the race for top four spot at the moment.