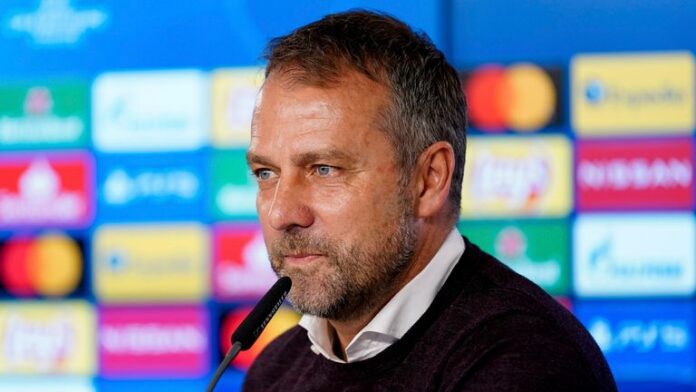 Bayern head coach Hansi Flick has considered quitting his Job at the Alianz Arena with Germany’s vacant coach position calling him for his services.

Hansi Flick has two years left on his current deal at the Bundesliga giant but he is rumoured to be the frontrunner for the Germany manager’s role which will be empty after the 2020 Euros.

Hansi Flick has clinched six major titles at Bayern Munich since he took over the position in 2019.

The Bayern Munich boss has been pointed as the better candidate to succeed Joachim Low when he finally leaves after the 2020 Euros.

Hansi Flick has told his current employer to end his deal as the manager immediately the campaign ends.

With so many scuffles going round the club, Bayern Munich’s sporting director Hasan Salihamidzic has had a sour relationship with Hansi Flick’s in previous weeks with so many tensions in Bayern Munich’s hierarchy. Although, his deal as the manager runs until the summer of 2023.

As we have reported before, Germany’s current manager Joachim Low will make vacant his role as the head coach of the national side immediately the 2020 Euro comes to an end and Hansi Flick link on succeeding him is growing rapidly in the sport media.

Lothar Matthaus who is an ex-Bayern Munich player has revealed to Sky in Germany that Bayern’s coach Flick tops DFB’s nominees of candidates for the position, and thinks Hansi Flick has already made up his mind to answer the offer when it falls on his desk.

Hansi Flick was Joachim Low’s second in command from 2006 to 2014 and aided Germany as the become the World Champions in Brazil 2014.

After Hansi Flick succeeded Niko Kovac back in November 2019, he has impressed in the position as Bayern Munich’s manager, sealing a total six major titles in a duration of just 18 months.

The major titles are Bundesliga, the German Super Cup, the DFB-Pokal, the FIFA Club World Cup, the UEFA Champions League, and the UEFA Super Cup.

As it stands now, Bayern Munich has a seven point gap to keep up with at top of the Germany topflight standings with five matches to spare. They were also pushed out of this campaign’s UEFA Champions League where Paris Saint-Germain outclassed the Alian Arena outfit at the quarter-final phase of the competition.

Nevertheless, Julian Nagelsmann, 33, is currently having an impressive spell with RB Leipzig where he is sitting 2nd in the Bundesliga. After hearing about the rumour, he denied the links and insisted that he is respecting his current contract he has with RB Leipzig.