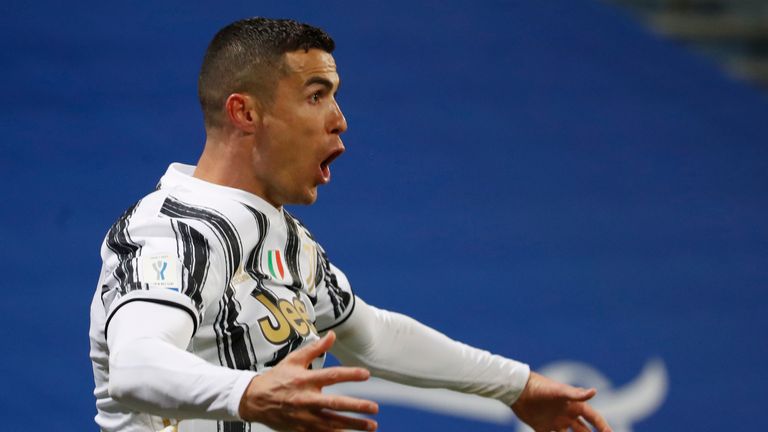 Juventus star is the highest goal scorer the world has ever produced where he netted his 760 official goals as a professional footballer against Napoli in the 2021 Italian Super Cup finals on Wednesday night.

Cristiano Ronaldo is currently the highest goal scorer in Serie A this campaign with 15 goals in 14 appearances. He also made it clear that he will continue to play football as long as he is fit (retirement is not imminent at the moment) and his dream is to win the world cup with the Portugal National team.

Cristiano Ronaldo has overtaken Josef Bican as the world top scorers for both club and country combined goals in his career where he reached a record 760 goals in all competition.

Old age has never been a stumbling block for Cristiano Ronaldo since he transfered to Juventus for a deal worth around £100m back in 2018 and his opening goal against Napoli in the Super Cup finals on Wednesday night was an essential factor as they clinched the trophy – he was also named man of the match at the finals.

The 5-time Ballon d’Or winner previously overtook football icon Pele with 757 goals on the all time scorer list. Pele is currently third position while Romario sits at fourth with 743 goals with Lionel Messi making the top five with a massive 719 goals with lesser games.

According to Opta, in his 760 career goals, 450 goals was scored when he played for Real Madrid making him the club top-scorer, with a staggering 118 goals for Manchester United in a 6-year spell. He also had 102 goals for Portugal’s national football team, 85 goals for current side Juventus and 5 goals at Sporting Lisbon where he began his professional career.

Still on opta statistics, Ronaldo has netted 27 goals against Sevilla which is his highest against a single club and he also scored 25 goals against Atletico Madrid. He also netted 23 goals against Getafe and that was alone massive in La Liga. 488 goals of his was with his right foot, 139 goals was made with his left foot, 131 goals came from his head and two goals was used by other parts of his body.

Ronaldo has netted 410 and 304 goals in a home and away ground respectively, 46 goals was also scored at neutral grounds. Ronaldo has 46 hat-tricks to his name, he has scored 136 braces and he also scored 4 goals, eight times in a match, and also registered five goals in a match two times.

Ronaldo played a key role when Portugal won Euro 2016 which was Portugal’s first major trophy in history. He also registered three goals in the semi-final as they seal the first ever Nations League organized in 2019.

The 35-year-old also claims he is not okay with the trophies and individual accolades he has in his name and with Portugal. He also made his intention known about winning the world most prestigious international trophy, the FIFA World Cup.

Furthermore, The next edition of the world competition will hold in Qatar in the year, 2022. At 2022, the five-time ballon d’or winner will be close to 38 years and he has taken that challenge upon himself.